This year I’m expanding my toolkit by learning new tools to create videos that inform, instruct, and entertain. The written word still has merits, but many times a short video can quickly convey information, especially to visual learners. This time I used PowerPoint tools to create an MP4 video, but decided to experiment with embedding voice or video recordings in the slides.

PowerPoint enables you to create a slide deck that you post to the Microsoft hosting site. You can set up the slide deck to run in a continuous loop or to be activated by a presenter or a user (say in a kiosk scenario). 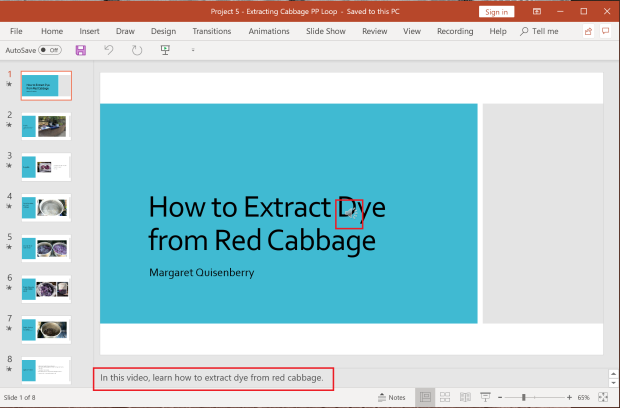 Use Notes for your script when you record narration

PowerPoint tools enable you to record a voice clip for one or more individual slides (or import a recording to run during the slide show, or starting from a particular slide in the slide deck).  I played around with this feature when setting up my slides. I used the Notes feature on each slide for my script. I used my laptop’s native recorder to record my narration on some of the slides. I imported photos, and some videos with sound. 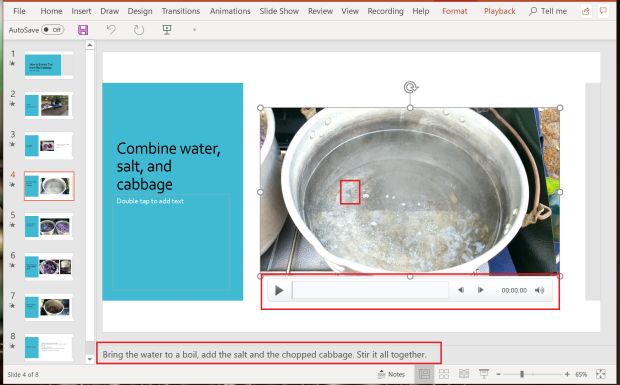 Some slides include sound embedded with the video, and a video file with my narration

I used PowerPoint features to practice my slide show, and timed how long to spend on each slide. I had some learning curve working out the timing. Some of the slides have two embedded audio files (one of my narration, and the other from the video). I finally realized that I needed to click the slide multiple times to activate each of the audio elements before they would play. This seemed a little awkward, but I can see how it would give a presenter options for controlling when sound is played (or skipped), so it made sense from that point of view.

I also got into a quagmire of having multiple recordings playing over each other at the same time during a playback session. I’m not sure whether that was due to my learning curve, or if the timing mechanism might be a bit buggy. I worked it out eventually by deleting voice recordings and starting a fresh session. There is also the mystery of why the “adding salt and cabbage to water” sequence plays twice. Again, I have to remind myself that the tool and settings are for presentations so my adaptation may cause trouble.

Record an audio clip for an individual slide using the laptop’s native recorder. The microphone icon indicates that a recording is associated with the slide.

The instructions seemed to indicate that I could use my saved practice times to create the video, but that’s not what I experienced. I exported my slide show to MP4 format, but my concise one minute and 20 second video ended up being 4 minutes and 38 seconds long, with lots of time spent languishing on each slide.  Even though I practiced my timing, and saved the settings, the resulting video still seems to spend the same amount of time on each slide.  I also found that the quality of my laptop recorder is not very good (or I haven’t found the right settings yet).  You can see the finished results above (hint: to save yourself some aggrevation, move the player head from marker 00:08  to 1:00).

Even though the results are a bit of a fail, it was still a great opportunity to see what PowerPoint has to offer. Sometimes it’s just best to use a tool as it was intended (in this case as a slide show creator rather than as a tool for generating videos with embedded audio). Still, it is fun to experiment and try using a tool in new ways. Sometimes that does pay off!

This year I’ve been learning how to use Movavi Editor, a popular and affordable video editing tool, with the goal of upgrading my personal and professional toolkit. The original project appeared in Toolkit: Sound Project and in the last few posts I’ve added a few basic and advanced features to the project.

Today we bring it all together. The original video now sports a short opening sequence and features such as a text overlay, zooming and panning, and transitions. Hope you enjoy the results. I’ve barely scratched the surface of what is possible with Movavi Editor, but I look forward to continuing my “video odyssey” in the months to come. Video provides another way to convey information, especially to those who are visual learners. And for some topics, who wants to read about it when you can see it in action in a video?